Here, I am trying to summarize what I have learned about materials modeling using the DFT method.

My focus is on Quantum Espresso software. To do that I have started to learn the basics of DFT. My sources are:

Simply refers to modeling of materials without using the experimental data or without fitting the data coming from experiments. If we know the fundamental characteristics and theory of materials and elements and put them on the paper with mathematical equations, we will get numbers or other equations that in the real world are a resemblance of experimental values.

The fundamental theory of materials, elements, or chemicals is Quantum Mechanics. Quantum mechanics is giving you numbers and equations that you can use to put the reality on the paper and show it by mathematical expressions.

The problem is the complexity of the equations and most of the time the need for supercomputers to solve them. These equations come from the complicated Schrödinger equation. When the words “Supercomputers and Calculations” appear, we should understand that the materials modeling is an interdisciplinary field that consists of materials science, physics, chemistry, mathematics, numerics, and software engineering.

So what? Why do we want to model the real world? Let it be as it is. right? The answer is the prediction. There are many scientists who want to predict their experimental results or predict their materials properties beforehand. That is why materials modeling becomes important. Some times you don’t have access to a specific chemical, or synthesis parameters are very difficult to control, or you are not sure about the final product’s properties.

DFT is a method of calculations to approximately solve the Schrödinger equation. It was established based on the assumption of electrons in the materials to be like an inhomogeneous gas. DFT is giving the ability to the current technologies to model the materials. DFT is still being optimized in terms of accuracy and calculation time.

As an example of a modeling application in designing new materials, we could mention the catalyst design for hydrogen evolution reaction, HER. The key point in this example is that the Gibbs energy for hydrogen adsorption on the catalyst should be around zero to be a good candidate to replace expensive platinum catalysts. DeltaG of H adsorption can be calculated by DFT by calculating the total energy of the system before and after chemically adsorption of H. Also, the stability of the imaginary catalyst can be calculated by the related Gibbs energy change as a result of degradation.

3.1.Particles Interactions
There are electrons and nuclei, that’s it. We should find their interactions and then find the whole energy of the package. Electrons repel each other, nuclei repel each other but electron and nuclei attract each other. These repulsions and attractions (Coulomb Interactions) are sources of internal energy. If we take “d” as the distance btw the particles, the energies are : 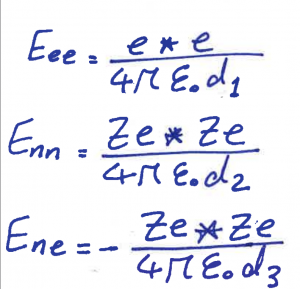 The negative sign in the last equation shows the attraction.

3.2.Many body Schrödinger equation
Describing quantum particle behavior needs determining the wavefunction of that particle in any area or point that we are interested in ( we are here to find the behavior of particles: any kind of behavior like electronic structure). In other words, the particles have different behaviors at different points, r,  of the space, to find that behavior we need to determine the wave function at that point.

it is the function of position. It also demonstrates the probability of finding the electron at position (r). if the wave function is zero at a position, the electron is not there.

eq 2
E is the energy eigenvalue of that stationary state.

There are some important definitions that are needed here:

is the probability of finding the corresponding particle at the position r.

3.4.Schrödinger equation for a single electron

If we simply consider that an electron is in a box with the potential of V(r) around it we can write:

eq 3
m_e is the electron mass and p is the momentum.

is the reduced Planck constant.

If we calculate the equation 3 and find the \psi_0 as our answer for the lowest energy of a single electron system then the electron distribution can be given by:

3.5.Schrödinger equation for many electrons and nuclei

However, for systems with many nuclei and electrons, it is not accurate to just linearly add singular contribution from particles. Here we need many-body wave function \PSI.

previously we had that :

But most of the time we want to find the total charge distribution probability. It means the summation of all the above probabilities for all arrangements. Here we sum these:

The first one is:

3.6.Electron or charge density in the material

As electrons are not such particles that we can label them and distinguish them from each other, all the P s are similar and we can write n = N*p.
N = electron numbers, so
n =

Integration n (charge density) all over the materials gives the number of electrons.

Now we can write the many-body equation.

the kinetic energy of both types of particles

This equation is everything we need. The stable materials without changing by time without the external field.

By solving this equation, the lowest energy, E,  of the system could be driven. Then from this energy, we could find all the properties of the material like elastic behavior, enthalpy of formation so forth. BUT, most of the time it is impossible to solve it. :((((( WHYYYY????

If we divide all parts of the above equation by the Hartree energy the shape of the equation would be simpler. (Hartree energy is the lowest potential energy between electron and proton in the Hydrogen atom).

eq 5
Here, there are just the atomic Mass and atomic Numbers are needed.

So far we just defined the proper equation that we can use to model the materials. However, the story begins here: How should we solve this equation? How should we deal with the interactions btw the electrons (the 3rd element from the left)?

It is useful to point out some concepts and definitions:

4.2. Step by step adding the other potentials to the equation

Until this point, we changed the many-body equation to the summation of single-electron equations with expressing the potentials that are imposed on single electrons in a solid. The next part, (DFT), is finding these potentials in ground states.

Mathematical equations and other stuff lead to:

this is the Kohn-Sham equation and is similar to the equation written for the single electron in the many-body environment. The point is:

How do we approximate this functional?

one example for the approximation:

(E_xc-HEG is well defined and calculated in [1])

Calculating the Kohn-Sham equation is not as straightforward as it is expected. Look at these sections:

So, as we see we are trapped in a loop that to find one thing wee need another thing. But: